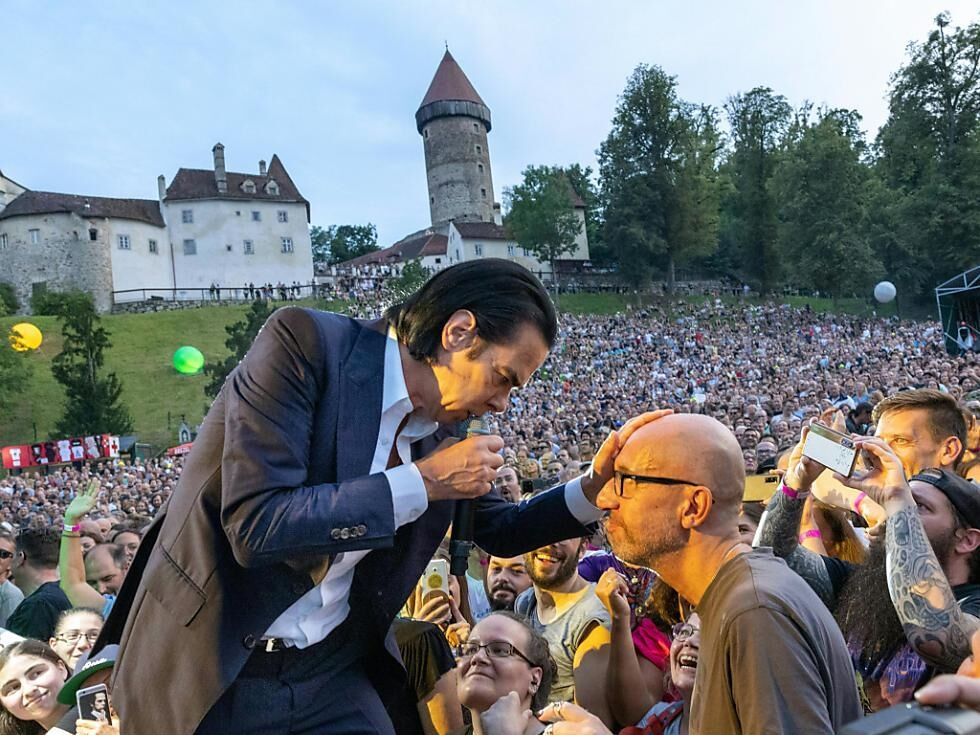 Nick Cave concerts often degenerate into pseudo-religious fan devotions with great musical accompaniment. On Friday evening, however, the Australian and his Bad Seeds almost thundered down on the stage at Burg Clam with an overdose of “Messianism”. A musically impressive experience over long stretches, in which the euphoria of the initial phase finally came to a standstill.

“Get Ready For Love” was a massive opener, followed by “There She Goes, My Beautiful World” and “From Here To Eternity”. What was immediately noticeable: Cave, always dressed in the finest cloth, is looking for the most intensive fan contact, indeed physical contact with his audience. He constantly dances around on a very narrow ramp in front of the actual stage, pats hands, often leans his entire body into the “wall” of the first row of fans, sometimes even hands over the microphone to fans – and sings, yes, trustingly yells his lyrics into the people. His Bad Seeds routinely play “back” on stage, most notably – not only because of his external similarities to a hermit discovered decades later – the equally freaky and grandiose multi-instrumentalist Warren Ellis.

The quieter numbers such as “Bright Horses”, “I Need You” (piano solo with a slight sweetening by its three-piece gospel backing choir in glitter robes), “Waiting For You” and “Carnage” were also extremely intense night fell over the stage of Burg Clam. The 64-year-old and his Bad Seeds, who were about the same age, then gave it their all with classics like “Tupelo” – the anthem for Elvis’ birthplace, actually for Elvis himself – and a rousing “Red Right Hand”.

But a little later the concert unfortunately got kind of strange: The “Higgs Boson Blues” with its bizarre “Hannah Montana” mantra irritated because of Cave’s behavior at the edge of the stage, which reminded one of a preacher. The glitter background choir did the rest to suddenly give the impression of a cheap gospel show from Vegas – albeit with intangible content of some kind of pseudo-religion. The dramaturgical climax of this disconcerting conclusion: In “Ghosteen Speaks” Nick Cave tore in the manner of an almighty savior – to lines like: “I think they’re singing to be free / I think my friends have gathered here for me / I think they ‘ve gathered here for me” – arms to the sky. And his thousands of worshipers did the same.

Imitating termites to cool our homes

does the pyromaniac archetype really exist?

No Result
View All Result